Two More to the Mix

Okay. So you know how I said making this one was going to be like taking a relaxing vacation? Well I wasn't able to put my feet up on this one. I decided while looking at the darker finished block that those pea green strips that look yellow just wouldn't work, so I thought I'd limit them. But that meant I'd have to pick new colors or repeat some I already used. So although I had to expend a little more thought energy than I anticipated, which I didn't think I had in me yesterday (I was beat - my work day drained me), I'm always energized when I get to be creative. Sometimes I forget it until I'm in the middle of it and feeling completely awake and alive. It's kind of like that thing about exercising -- I dread the thought but I'm always happy and feeling great once I drag myself out to do it. The difference is I never dread sewing no matter how tired (The travails of a working boy! I need a full time sewing gig, but that's a post for another day). So I kept those yellowish/pea green accents in the prints because I love, love, love those fabrics much, and it seemed to really tone down the yellow feel. Here's the block: 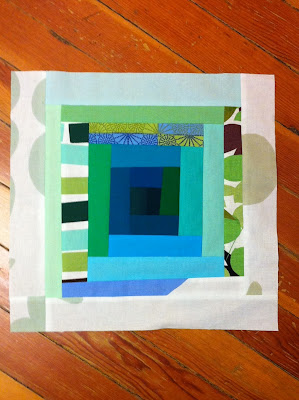 I love it. And here they are side by side: 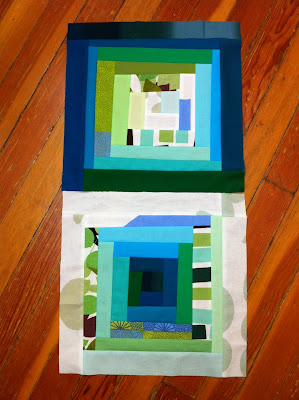 Another Approach to Blue

I've got a new attitude about blue. I've decided to add green for two reasons: first I don't like any blue blocks I've done for this quilt so far, and second I bought what I thought was a ton of precut 2 1/2" solid color strips, but it turns out I'm going through them like a mad man, so the single colors are running low. No matter, I like being resourceful. It makes it more fun for me and seems to deepen my creative possibilities, and there's no telling what kind of happy "mistakes" I'll make by combining colors. I'm posting pictures so I can talk through some thoughts I had while choosing and sewing. 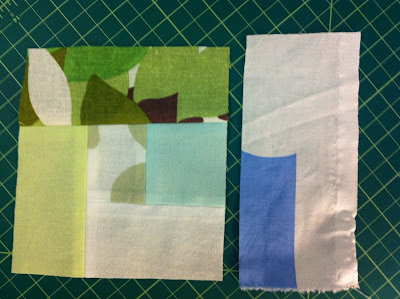 Usually the first few pieces are pretty easy for me to choose. I try to find the lightest shade of the block color I can find, and sometimes I choose just straight up white. I like a little bit of the shade of the color in the second, third or fourth piece next to a white piece. In this case, though, I decided not to use a solid white but try to go for prints that contained white or off white, and then throw them next to some light blue and green solids. Early on in the block, it's a crapshoot and I usually feel some fear about making the "wrong" choice, but you know what, it really doesn't matter, because no matter where I am in the block I can always proceed from where I've been. Hmm, sounds very Zen. But the color choices before always influence my choices ahead. 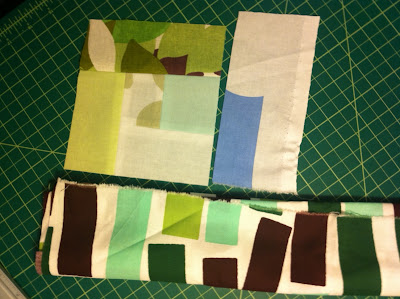 I like to grab different fabrics to see them next to what I've sewn and imagine what they might look like after they're sewn in. The full piece of fabric looks much different from a 2" strip and so I really have to use my imagination and hone in on smaller areas of the fabric that might look good. The one above had a lot of brown in it so I fold and refold and find some spots that have more blue and green and I come up with this: 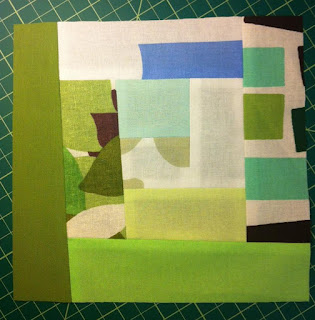 I think it looks pretty cool so far. And I like how you can only see the tips and edges of those brown parts of the new piece. It also seems to balance the piece opposite it with the brown and dark & light green leaves. Cool contrast. 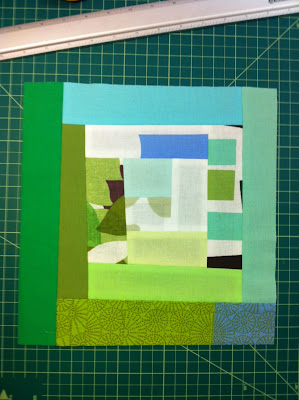 So at this point I feel like I could be off my rocker because of some of the colors I've chosen. I tried something this time that I haven't usually thought too much about in the past blocks for this quilt. Since I used so many prints with lots of colors in them I started looking at using the solids to complement the little oddball colors in the prints. I noticed that turquoise and shades of aqua emerged. I like this, it's going in a direction that makes me smile. 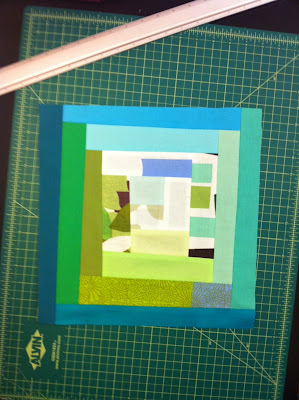 So I kept going with it. I afraid I might be getting too blue heavy. Above, it kind of makes that lower left corner of green look like yellow. Not what I was going for but I think I'll forgive myself and think instead about the big picture when this bad boy is resting next to his colorful neighbor in the finished quilt top. Phew, disaster and melodrama averted. 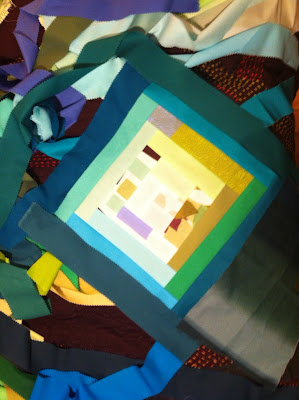 I like to lay the block on top of dozens of randomly colored strips and play around with the one that'll come next. Since this is the last round, I want them to be quite dark so that they frame the piece but still go along with the color theme. This time I toyed mostly with dark blue but realized I was getting blue heavy so threw in a dark green and a really cool Marimekko gradation of dark blue, dark green and light blue. Below, it's the one on the far left. It's hard to see how subtle and beautiful the combination is from the picture, but, up close, it's gorgeous. It was too short so I spliced another piece into it. And this is the finished block: 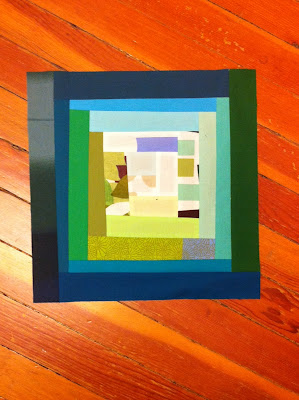 It's going to show up amazing in the finished top.Tonight I'm making the reverse block, dark center to white border, which is always like taking a relaxing vacation since I've already worked out the color choices in the first block. Alright!
Posted by Dan at 2/24/2011 5 comments:

Alright folks I'm getting real inspired by your comments and your blogs and how-to's and what-not's, so, since I've sewn absolutely nothing this week and I'm itching to post something, I'm going to inspire myself by posting a few shots of my workspace. 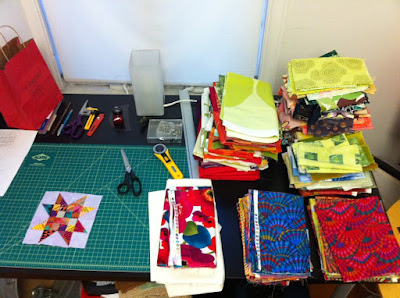 I'd like to say my fabric is beautifully organized and lives on its own shelf, but it isn't and it doesn't. It's loosely filed by size, age, maker, and color, and it lives on the edge of my cutting table. Since I'm new to sewing I've only built a small stash but I am addicted and intend to have WAY TOO MUCH fabric some day very soon. The table edge storage unit will not last. 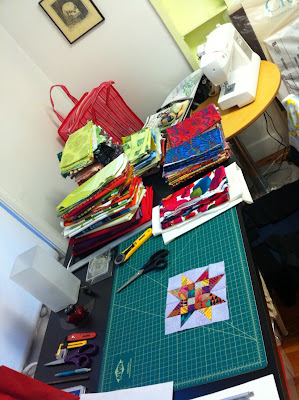 And here's wonky work space. I show this only to say that I have a sewing machine and it lives on a wonky little table that wobbles when I sew. It must go. All of this is tucked into a small space of my kitchen, which, if I cooked, would be used for eating. I make it work with the space I have! 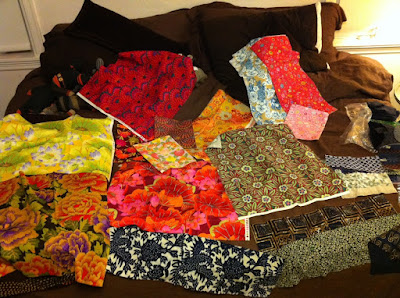 And here are some fat quarters and some scraps I bought recently displayed on my other work space also known as my bed. In the upper left corner are a few sock monsters I got obsessed with making a few months ago. Someday I'll make more. 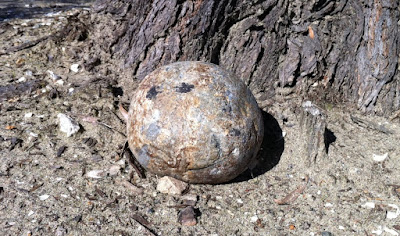 And here's what looks like a pterodactyl egg I found behind my work.
Posted by Dan at 2/23/2011 6 comments:

New Kids on the Block 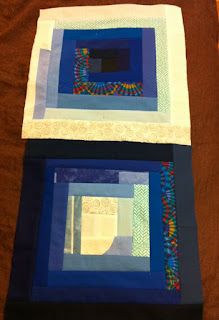 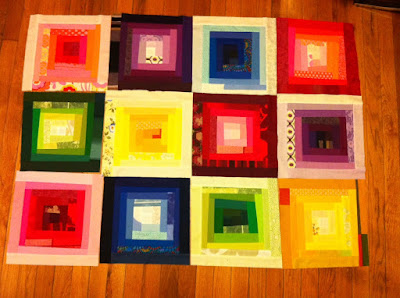 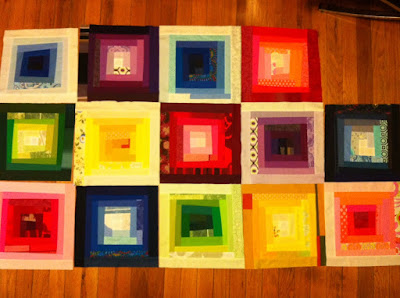 Well I've got two new blocks to add. I love the color blue but there is something I'm just not sure I like about any of my blue blocks. When I stand back and look at them surrounded by the other blocks, I think they look amazing, but on their own, I'm not too crazy about them. Anyway I think I'm done with blue for this project. Originally I thought it would be predominately made of blue, and it turns out that the red blocks are my favorites! I've got 11 more blocks to make before the top is done. I think they'll be purple, green, maybe orange, I don't know what else. My stash will determine the rest.
Posted by Dan at 2/18/2011 7 comments:

In Progess - My First Quilt 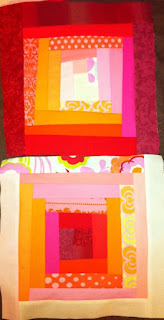 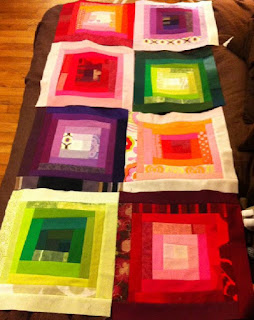 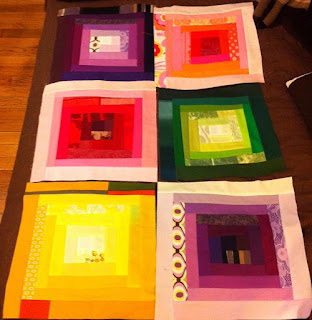 I've been working on this style of block for a couple of months now. All of the solid colors are Robert Kaufman Kona Cotton Roll Ups. Some of the others are Amy Butler and Marimekko. For half of the blocks I'm using color values of dark in the center to light around the outside, and the other half will be light in the center to dark around the border, and for each block I'm using shades of the same color. After making a few blocks I realized I could use the same fabrics but simply reverse the order that I sew the colors, starting in the center and working outward. You can see it in the first picture of the two red blocks. They both use the same fabrics but the colors from center to border are reversed. It really made all the blocks look tighter and just seemed to make the whole look better. I'm about a third of the way done with it. It'll be 25 blocks total, each block is 15 1/2", about a 75" square. I'll post my progress as I go. I get sidetracked on other projects -- there is just too much fabric and too many cool and creative ideas to run with! I love it.
Posted by Dan at 2/14/2011 6 comments: 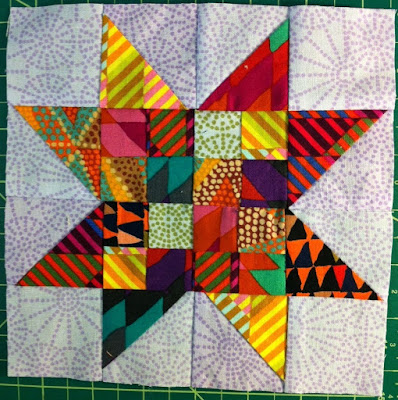 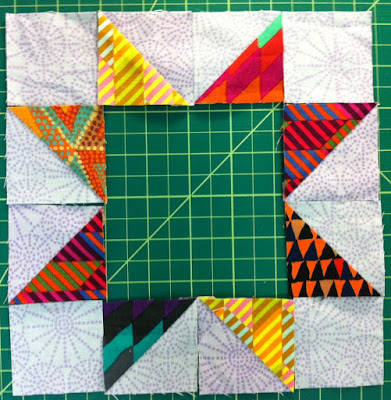 For this I used Marimekko fabric for the ferris wheel border and Brandon Mably fabric for the star. It will be 6 1/2" when done and I think I'll make more of these to build them into a larger block like the 23" block I posted earlier. I'm just going to run with it and see what I come up with, but so far I love this one.
Posted by Dan at 2/12/2011 2 comments: 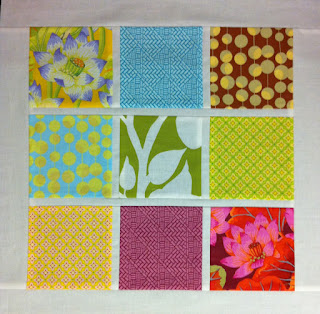 I made this block last night, thinking it would become a pillow case, but it turned out one inch smaller than I had intended - 23" instead of 24". I haven't confirmed it yet but I believe I'm sewing a larger seam allowance than 1/4". It's hard to tell on my machine so I will fiddle with it tonight and actually measure the space. Pretty great for a beginning sewer! My favorite piece is the center square which is a Marimekko fabric. It's got a most wonderful texture that's just a little bit rough like linen or canvas. The two flowers in the upper and bottom corners are Kaffe Fassett fabric. I love just about everything I see from Kaffe Fassett. I'll definitely be working with more of those fabrics soon. I've picked up a few Brandon Mably fabrics that I love so will be using them soon. But as far as this block goes, I'm starting to consider it the beginning of a new quilt. Mind you, I've already got one ambitious quilt project in the works that will take a while (I'll begin posting my progress soon). But I would really love to see nine blocks of a variation of this design and these fabrics.
Posted by Dan at 2/11/2011 4 comments: